Everything You Need to Know About Bhai Dooj 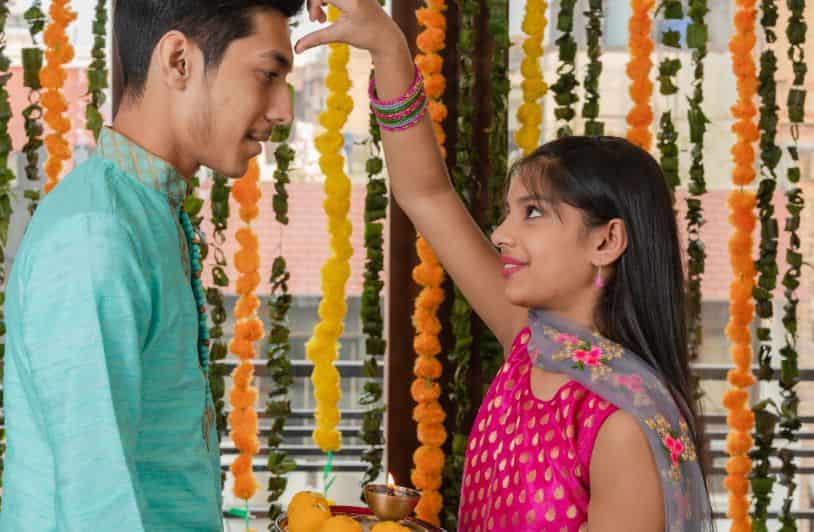 Festivals give our nation’s rich culture and long-standing traditions a lively face. India’s holidays are fantastic because they honour this unbreakable bond between celebrations and their associations with mythological traditions and religion. One such festival, which is the most awaited one, is Bhai Dooj. In English, Bhai means brother, and Dooj means second, meaning thereby, the auspicious festival of Bhai Dooj is celebrated on the lunar day of Shukla Paksha, in the month of Kartik, or October-November.

The relationship between a brother and a sister is like a roller coaster ride filled with childish banters, hilarious moments, giggles, secrets, waves of laughter, and whatnot. The festival is celebrated by sisters applying Tilak on their brother’s forehead; they pray for each other and exchange bhai phota gifts. The festival is widely celebrated in the country and outside, like Nepal, etc.

The festival is known by different names in other Indian states, such as Bhai Phota in West Bengal, Bhaubeej in Maharashtra and Goa, Yama Dvithya in Bihar, Bhaiya Dooj in Haryana and Uttar Pradesh, and so much more.

A legendary celebration with a long history is called Bhai Dooj. According to one legend, after destroying the demon Narkasura, Krishna visited his sister Subhadra. Tilak was put to her brother’s forehead as Subhadra welcomed him with a Puja Thali. To make it even more memorable, she also brought sweets and blossoms. Yama and his sister, Yamuna, whom he saw on the second day following the full moon or Dwitheya, are the subject of another legend. Since then, the day has also come to be known in southern India as the “Yamadwitheya” or “Yamadvitiya.” The final day of the five-day Diwali or Tihar celebrations falls on the auspicious Bhai Dooj holiday.

Raksha Bandhan and Bhai Dooj are both festivals that are celebrated with comparable fervour. Sisters apply a Tilak made of vermillion, Dahi or curd, and rice to their brother’s forehead. Then, while chanting mantras and dousing their brothers’ palms in water, they lay blooms of Kaddu, beetle nuts, and beetle leaves in their palms. The custom is then followed by sisters tying a holy thread or Mauli or Kalawa on their brother’s wrist for their safety as a Raksha sutra. Additionally, a lamp that is facing the Sun has been lit. The brothers show their sisters how much they care by giving them gifts. If a girl does not have a brother, she marks this day by worshipping or praying to the moon.

The month they fall in is the primary distinction between the Bhai Dooj celebration and Raksha Bandhan. Raksha Bandhan falls in the Shravan month, or August, whereas Bhai Dooj occurs in the Kartik month, October or November. The second notable distinction between these two holidays is that, during the Rakhi festival, the brother swears to guard his sister by tying the Rakhi knot around his wrist. In Bhai Dooj, the sister puts a Tilak on her brother’s forehead and vows to keep him safe from all harm. A duo of Sisters, a duo of brothers, a pair of daughter and father, and non-biological sisters and brothers can all celebrate Raksha Bandhan. Still, only biological sisters and brothers usually celebrate Bhai Dooj.

All the states celebrate this auspicious occasion in different ways, but the common thing in every kind of celebration is the love siblings share for each other. The sisters try their best to make the celebration memorable for their brothers and to do so, they also send bhai dooj tikka online if their brothers live out of town or country.

There, now you know everything about the auspicious festival of Bhai Dooj, which is undoubtedly one of the most awaited occasions among the siblings.

How To Include Coconut Oil In Your Beauty Regime?

The Best Beauty Deals For Now In 2022 You Should Know